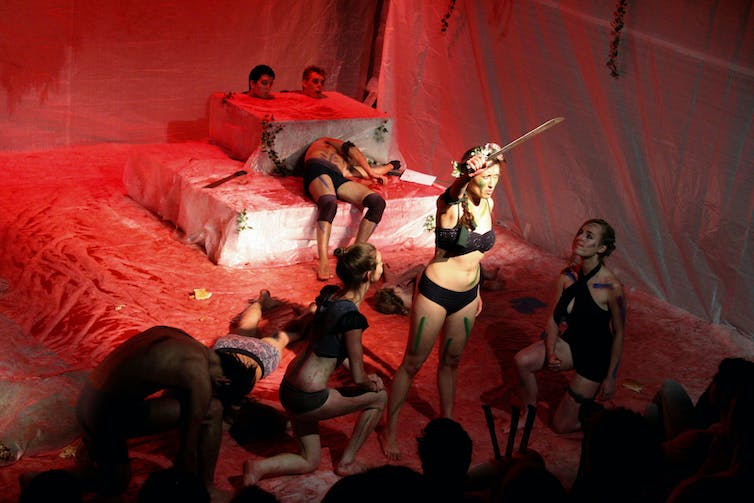 We are repeatedly told that today’s young people are oversensitive, claiming to need “trigger warnings” and to be traumatised by literary texts – including the works of Shakespeare – that previous generations took in their stride. But is it really true that readers and theatregoers of the past were more emotionally resilient than today’s “snowflake” generation?

In his 1765 edition of the The Plays of William Shakespeare, the great 18th-century critic Samuel Johnson admitted that reading certain scenes in Shakespeare’s King Lear gave him a sense of extreme discomfort. He found the death of Lear’s daughter, Cordelia, in the tragedy’s last act, so upsetting that he avoided ever reading the scene again until he was forced to do so by his work as an editor.

Moreover, he claimed, the blinding of the elderly Gloucester in the middle of the play was so terrible that a theatre spectator would not be able to cope with it. He described it as an act “too horrid to be endured in dramatic exhibition”.

Was Johnson a snowflake, too? If he was, then so were many others of his time. There is a long history of censoring and rewriting the plays of Shakespeare in order to make them less traumatic to their readers and spectators.

In 1681, King Lear was rewritten by the dramatist Nahum Tate with a revised, happy ending in which both Cordelia and her father live – and this was so popular with audiences that Tate’s adaptation was the only version of the play to be performed on stage for the next 150 years.

Meanwhile, another notably violent Shakespeare play, Titus Andronicus, was similarly rewritten. Titus features a female character who is raped, and subsequently has her tongue cut out and her hands cut off to prevent her from telling the names of her attackers. When the play appeared onstage in England in 1850, all this material was removed.

As a contemporary reviewer wrote: “The deflowerment of Lavinia, cutting out her tongue, chopping off her hands … are wholly omitted”. As the reviewer went on to comment, the play then seemed “not only presentable but actually attractive as a result”.

The violence was not the only thing that readers and spectators found upsetting about Shakespeare’s plays. Race and sexuality also caused problems. The US president John Quincy Adams wrote in 1786 that although he thought Othello in many respects a great work, he found the mixed-race relationship at its heart, “injudicious, disgusting, and contrary to all probability”.

Other prominent figures also expressed their reservations about aspects of Shakespeare. Queen Victoria, for example, criticised the plays for their sexual humour. She wrote to her eldest daughter in 1859 that she had never “had the courage” to see Shakespeare’s Merry Wives of Windsor on stage, “having always been told how very coarse it was – for your adored Shakespeare is dreadful in that respect, and many things have to be left out in many plays”.

Censoring the plays in print

To counter these and similar objections, a market developed for censored print editions of the plays. In 1815, Thomas and Harriet Bowdler published The Family Shakespeare in order “to present to the public an edition of his Plays, which the parent, the guardian, and the instructor of youth, may place without fear in the hands of the pupil”.

The Bowdlers edited 20 of Shakespeare’s plays for this publication, removing swear words and many of the references to sex and violence. They also changed plots to make them less potentially distressing – the death of Ophelia in Hamlet, for example, became an accidental drowning, to avoid disturbing readers with a portrayal of an apparent suicide.

The Bowdlers were criticised by some of their contemporaries for having gone too far in tampering with these classic works – but their edition was still hugely popular and, by the end of the 19th century, hundreds more censored versions of Shakespeare’s plays had appeared in print.

Race, violence, sexuality, suicide: many of the things that modern students have been accused of finding upsetting about the plays are exactly what bothered readers and spectators of the past. Shakespeare has never been a safe or reassuring playwright and his works have always been capable of disturbing their audiences.

The specifics of what is found offensive may alter, of course: most modern critics of Othello have been more concerned about whether the depiction of the title character is itself racist than worried about whether the play advocates for mixed-race marriage.

Nevertheless, we should rethink the idea that there is something uniquely or unusually fragile about today’s young people in their response to Shakespeare, when such a claim is contradicted by the evidence of the past.

This article is republished from The Conversation under a Creative Commons license. Read the original article.